There was a problem rendering your image gallery. Please make sure that the folder you are using in the Simple Image Gallery Pro plugin tags exists and contains valid image files. The plugin could not locate the folder: media/k2/galleries/864
Saturday, 07 April 2018 15:36 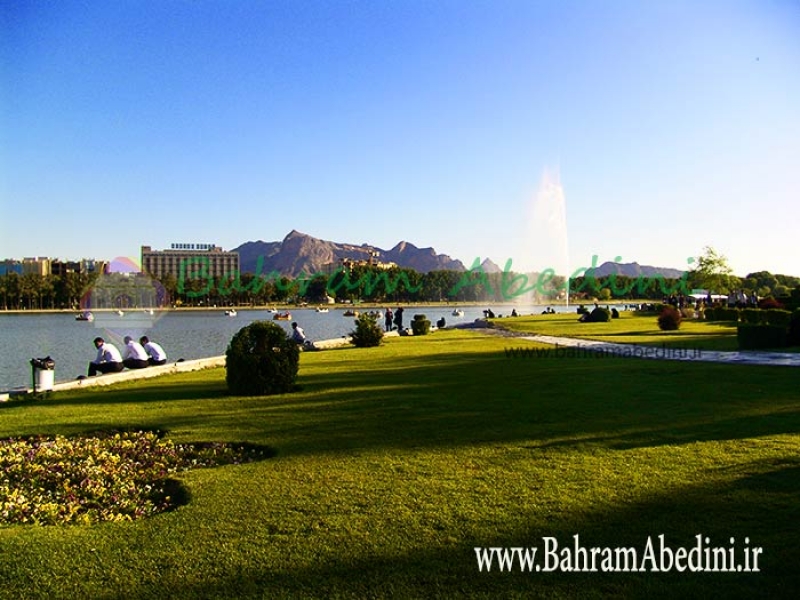 When Shah Abbas decided at the end the sixteenth ce3ntury to make Esfahan his capital, he started building on what was virtually an open site. The clutter of houses which had now grown up round the Friday mosque and the bazzar were left as they stood; the new city began where the old one left off, again to the south and west, on the site of the present Meydan-e-Emam. The Meydan was planted at a spot where the life of Esfahan as it stood would flow through it; it was to be the meeting place of monarch and citizens.

Into this great square, measuring 510 meters by 165, seven times the size of the Piazza San Marco at Venice, the bazaar debouched on the north, while to the west lay the place quarter and to the south and east respectively the Royal and Sheikh Lotfullah Mosques. The Meydan was at once a market place, a cathedral square, a polo ground and a place of assembly. Fryer gives an interesting catalogue of the spectacles which Shah Suleiman watched in the meydan from Ali Qapu: contests between lions and bulls; rams set to run at one another; nobles tilting; coursers trying to shoot backwards with bow and arrow at a golden bowl fixed on a high pole; wrestling; gladiators. What he does not mention, strangely enough, is polo, through the original goal posts are still to be seen at each end of the Meydan.

The two mosques facing the square are alike in spirit, but utterly different in form. The smaller, Sheikh Lutfullah was built by Shah Abbas between 1602 and 1618, most probably constructed as a madresseh. In size it is relatively modest; a flattened dome rest on a square dome chamber and is reached by a corridor which runs diagonally from the entrance portal on the Meydan; that is all. There is no courtyard, no eivan, save the entrance portal, no vaulted galleries, no open space; everything is within. The whole interior is covered above dado level with mosaic tiles of extraordinary brilliance; all is color, light, motion; every detail is perfect. The use of unglazed tiles as background to the floral pattern, both on the dome and within, spares the eye a surfeit of color and glaze and sharpens the impact of the pattern. The dome is inset with a network of lemon shaped compartments which increase in size as they descend from a formalized peacock at the apex.

The enormous Imam Mosque was started early in the seventeenth century -the exact date is disputed- and not finally completed until after Shah Abbas’s death in 1628. Nevertheless it was built in a hurry. Shah Abbas, it seems, to constantly nagging at the architects and builders to get it finished. They were pressed to proceed at once on the foundations. The architect, one Abul Qasim, is said to have warned the Shah against the dangers of subsidence, but he brushed these warnings aside. Thereupon, the story goes, the architect disappeared for five years, having taken careful measurements. When he emerged from hiding, he discovered that his fears had been fully justified. He reported this to Abbas and was forgiven. The same hustle prompted the use of Haft Rangi (seven-color tiles) in the place of Kashiy-e Mo’arraq (mosaic tiles) throughout the building except for the inscription and the entrance portal, the portal, the earliest part of the Mosque. As a result the decorate work does not compare in delicacy or refinement with that of Sheikh Lutfullah or many earlier buildins. Nevertheless the total effect is overwhelming.

Although the Ali Qapu looks like a grandstand, and indeed served as one, it was in fact a royal radiance as well as a gateway palace to the royal complex of gardens and palaces behind. It is a very tall rectangular building of five stories; the façade facing the Meydan carries an enormous balcony, covered with a wooden roof supported by very tall wooden columns, the height of the third and fourth stories combined. This terrace is the talar, or royal enclosure, from which the safavid kings watches the ceremonies and sporting events in the square below. The talar is the throne room which was used as an audience chamber; it is decorated with wall paintings of the period in which European influence was strong. For the rest, the interior of the Ali Qapu is at once quaint and complex. A most involved system of winding stairways leads from one floor to another and on all floors there are wall paintings of much charm, with on the top floor a central hall containing porcelain chambers, that is to say, niches of various shapes fitted into the walls, serving as an acoustic device.

This whole arrangement was to be the center piece of a modern city planned with the most visionary insight. Wide avenues, accessible streets, It was to take over two more centuries for others to arrive at the same city planning concepts. On 22 June 1852, Napoleon III asked Baron Haussmann, a French civic planner, to rebuild Paris. Between the Revolution of 1789 and Haussmann’s renovation of Paris in the 1860s ideals changed from those of a politically motivated city to those of an economically and socially centered city. This was what Shah Abbas had envisaged for his Esfahan. One of the most fascinating ventures of his modernization of Esfahan was the Chahar Bagh Avenue itself. Apart from forming the axis of the new city, the four rows of plane trees on each side created a pleasant walkway unparalleled by any street in the world. Four vineyards bordered on the boulevard, two on each side, earning it the name Chahar Bagh or four-fold garden. The lower section of the Chahar Bagh was a promenade for the royal family and court. It was enclosed by wooden fretted walls of medium height, broken at intervals by gates. Most of the gates led to shady orchards. At the center of the boulevard there was a canal. Water trickled in little cascades from its wide tiers. Wide sidewalks were laid out on both sides for pedestrians and horsemen, with flower beds enhancing the beauty of boulevard. The Chahar Bagh Boulvard was one of the most magnificent avenues of the world. On Wednesdays, the Chahar Bagh was closed to men and women shopped and walked there, picnicked and strolled all day long. One of the most beautiful madrassehs of the Safavid period, Madrasseh-e Madar-e Shah, sits along the avenue.

{gallery}864{/gallery}
More in this category: « Esfahan- The Pearl of Persia (Part I) Shiraz-the “City of Roses and Nightingales” »
back to top