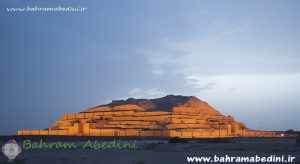 Chogha Zanbil is One of the greatest elamite buildings and the remnants of ancient history of mesopotamia. This great fortress was originally a temple and is situated in South-west of Iran in Province of Khuzestan near the Susa city.

This region is ripe with ancient history of Iran and mesopotamia. Chogha Zanbil is one of those fascinating places. At the first glance it is like a fortress built near the River Dez which is a big branch of Karoun River.