Esfahan- The Pearl of Persia (Part I) 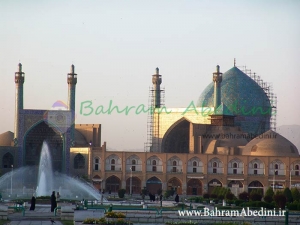 The 17th century Safavid capital referred to as “Nesf-e-Jahan” (Half the World) by  the Persians, is where today, the climax of Persian architecture can be witnessed in the serene purity of its grandiose mosques and elegant palaces. The ancient city gained political significance under the mighty Saljuqs in 11th and 12th centuries. The superb congregational Mosque of Esfahan dates mainly from this glorious period, having many earlier parts and later additions, earning it the title “the encyclopedia of Persian Mosque”. The great Safavid monarch, Shah Abbas I, moved his capital to Esfahan in 1598, where he lay out a new city center with a vast central square adorned on each side with a remarkable monument, the majestic Imam and Sheikh Lotf-o-LLah Mosque, the reception and gateway palace of Ali-Qapu, and the Qeisarieh Bazaar.