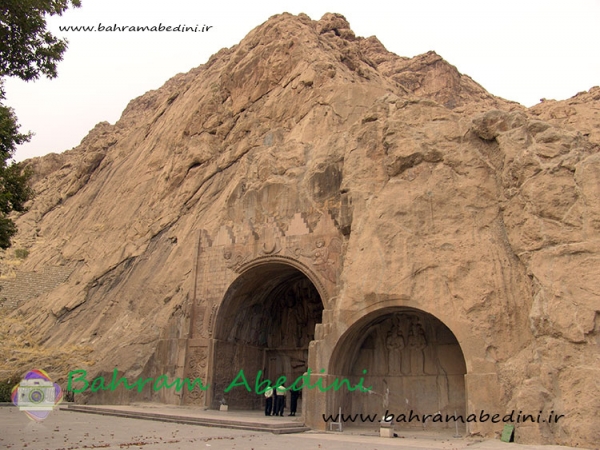 The Historical site of Tagh-e Bostan or (Taq-e Bostan) is situated in Kermanshah City in Iran. Taq means an Arch and Bostan means A very beautiful garden. Thus, Taq-e Bostan means an Arch of a very beautiful garden. The appellation of taq or arch here refers to two ancient arch from Sassanid dynasty in Iran. Tagh-e Bostan is consists of the big arch, small arch and a plate of stone inscription outside the cave. These two arches have been carved out of stone in the mountain. Outside the big cave there are two winged angels holding a medallion. Inside the cave there are many carvings including a big horse and a rider which is “Khosro Parviz” the king of Iran in Sassanid period.

the 3 figure carving above that, is the investiture of a Sassanid king called “Khosro Parviz”. In this carving there are two other figures who are “Ahoora Mazda” The Iranian God and the “Anahita” the Iranian goddess. They are giving the Ardeshir The II his power to rule over Iran.

Outside the cave in there are carving of a tree which is the tree of life. This tree has gave birth to the two winged angels and gave them a child. They are the origins of life.

The carving without the cave is the oldest carving in sassanian period and is the investiture of “Ardeshir The II”. And in the right is the “Ahura Mazda” and in the lest there is “Zartosht” or “Mithra” with a glowing rays around his head.

Taq-e Bostan is full of Iranian ancient history, a period which Iranian are all proud of it. The carvings are spectacular and the archeological site itself is unique. If you are in Iran travel there for sure. Kermanshah and west of Iran is a region ripe with history and because of its natural hard rocks there are many carvings, figurines and ancient caves in here.

Written and translated by Sohrab MirzaAbedini

More in this category: Bisotun Inscription »
back to top