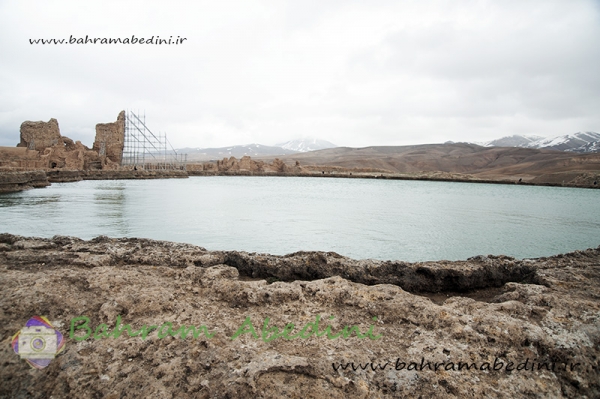 Takhte Soleyman or Adur Gushnasp (Azar Goshnasb) is situated in 45km away from Takab a city in West-Azarbayejan of Iran. This place is based on a natural sediments of a lake and is 20m above the height of the agricultural fields. The Siege of this site has 38 ornate towers in elliptic shape. Inside the Takht-e soleyman there is a natural lake with 120 m of length and 80 m of wideness.

Water is springing from a depth of 65 m height and it produces 100 liter per hour of water with surface temperature of 21 C. This ancient citadel spreads over 124000 square meter. In the center there is fire temple belonging to Sassanid period. The German-Iranian archeologists discovered this famous fire temple which has been destroyed by Roman king Heraclius in 624 Christian. You can see this spectacular skeleton of Takht-e Soleyman here:

Researchers have included that Takhte Soleyman is the old Shiz which was also famous as Kanjak in Sassanid period and roman called there Gazga and Arabs called there Shiz too. It has been also found that this citadel was founded in Sassanid dynasty. However, it has been again a place of interest in Abaghakhan in mogul’s period and has been rebuilt again. The Arch of Khosro or Ivan-e khosro is a little smaller that Arch of Mada’in or Taq-e Kasra and is situated in north west of the lake. The khosro fortress is in west of the fire temple and is built in Roman Bazilika’s style. You can see its pictures here:

This archeological site has several interesting buildings and places to see and beside that there is a magnificent natural lake in the center which is very deep indeed. This lake is called takhte soleyman lake and is 75m depth and in the deepest part 100m deep. The spring is 42 degree of centigrade in the core and 21 degree in the surface. You can see its pictures below:

And also you can find the place with the map below:

More in this category: « Chogha Zanbil ziggurat
back to top